Click above to listen to Awaken the Dawn as you read. This track version is from 2009 Best Holiday Album December Peace (ZMR Awards, winning over Enya and Yo-Yo Ma). If you enjoy, please consider sampling and ordering the CD, MP3 Album or sheet music. You can also listen and download on iTunes and all other digital outlets.

The Sled ~ by Stanton Lanier (Copyright 2012, not to be re-published without permission)

Cypress Road was packed with fresh fallen snow in Chapel Hill, North Carolina. I could see it through the big living room window of my childhood home. The temperature was just below freezing. School was closed. My tummy was full with a vitamin fortified Kaboom cereal breakfast. All my “Mt. Everest” gear was in place. It was another dream winter morning for a nine-year old. Cypress Road. One hundred yards long with a perfect twenty degree slope. Another downhill sledding adventure was about to begin. 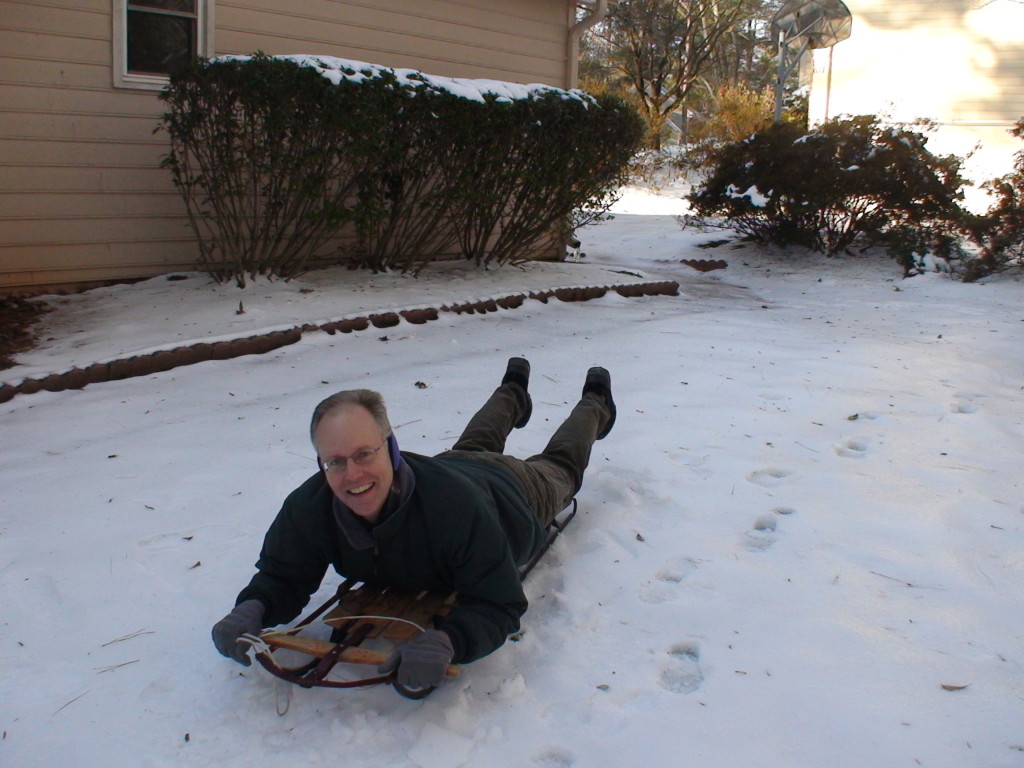 Every day after Christmas I waited… January… February… March… April… no snow. I couldn’t believe it! My sled dream had come true, but the snow never came that winter. The following summer my dad took a new job in Pensacola, Florida. As my eleventh birthday approached, I wondered “Is this really happening?!” My new sled and I were moving to the Florida panhandle! That was a long time ago. The Gladding Champion Fastback is now stored in the basement, still gliding through life with me. The glamorous adventure he was born for has ended up being a humdrum existence. A historic two inch snow at our house in Milton, Florida only resulted in a drag across the flat front yard. A few times “Champ” has coasted down some small slopes when we have had ice and snow in Atlanta or north Georgia, where I have lived most of my life. But for the most part, it just rests in storage, waiting to deliver pure joy with a long, downhill run.

Every December when I see my sled, I still long for that joy ride. But I am also reminded that no earthly possession will ever bring me the joy that comes from a relationship with Jesus Christ.

What is your sled? Do you treasure Christ above all earthly treasures?